Houlin Zhao was elected ITU Secretary-General at the 19TH Plenipotentiary Conference in Busan, Korea, in October 2014. He took up his post on 1 January, 2015.

Born in 1950 in Jiangsu, China, Mr Zhao graduated from Nanjing University of Posts and Telecommunications, and holds an MSc in Telematics from the University of Essex in the UK.

From 2007 to 2014, he served as ITU’s Deputy Secretary-General, where he effectively assisted the ITU Secretary-General, in close cooperation with the other elected officials of the Union, to manage the implementation of the ITU Strategic Plan and the operations of the ITU Secretariat, in particular with a view to increasing the transparency and efficiency of the organization.

He was responsible for implementing important innovations including the promotion of a new category of membership open to the global academic community, internal efficiency measures such as the move to a near-paperless work environment, the increased use of remote participation systems, and measures to increase revenue from sales and cost-recovery services. In addition, he focused closely on membership-driven priorities including maintaining and extending ITU’s commitment to accessibility, to multilingualism, and to broad multistakeholder participation in the work of the Union.

Prior to this Mr Zhao served in the elected role of Director of ITU’s Telecommunication Standardization Bureau (TSB) from 1999 to 2006. During his two terms of office he spearheaded the introduction of new efficiency measures to improve ITU’s standards-making environment through fostering even closer cooperation with industry members, while strengthening the promotion of ITU’s leadership in global ICT standards development.

From 1986 to 1992, Mr Zhao was a senior staff member in the then CCITT, and from 1993-1998 in TSB. Among his responsibilities as Counsellor for ITU-T Study Groups, he was Coordinator for cooperation with other international technical bodies, including ISO and IEC.

Before joining ITU, Mr Zhao served as an engineer in the Designing Institute of the Ministry of Posts and Telecommunications of China, taking an active role in his country’s expert meetings on telecommunication standards and national plans, as well as participating in CCITT Study Group meetings as a Chinese delegate. He contributed important articles to a number of prestigious Chinese technical publications, and in 1985 was awarded a prize for his achievements in science and technology within the Ministry of Posts and Telecommunications.

As ITU’s 19th Secretary-General, Mr Zhao is committed to further extending ITU’s community by encouraging more industry members and academia from around the world to join the ITU family. He has also initiated a more open-door policy to welcome other stakeholders and partners, as well as promoting the greater involvement of small- and medium-sized enterprises in the work of the Union.

He is married with one son and two grandchildren, and is fluent in three official ITU languages: English, French and Chinese.

Read his Acceptance Letter for Patron of Global Cyberlympics. 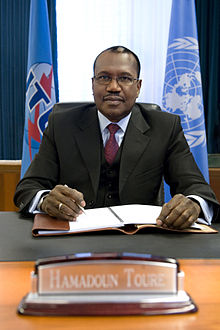 Dr Hamadoun I. Touré, Secretary-General of the International Telecommunication Union (ITU) since January 2007, was re-elected for a second four-year term in October 2010.

As Secretary-General, Dr Touré is committed to ITU’s mission of connecting the world, and to helping achieve the Millennium Development Goals through harnessing the unique potential of Information and Communication Technologies (ICTs).

A long-standing champion of ICTs as a driver of social and economic development, Dr Touré previously served as Director of ITU’s Telecommunication Development Bureau (BDT) from 1998-2006. In this role he placed considerable emphasis on implementing the outcomes of the World Summit on the Information Society (WSIS), launching projects based on partnerships with international organizations, governments, the private sector and civil society.

Dr Touré started his professional career in his native Mali in 1979. He built a solid career in the satellite industry, serving as managing engineer in Mali’s first International Earth Station. He joined Intelsat’s Assistance and Development Programme in 1985. He was appointed Intelsat’s Group Director for Africa and the Middle East in 1994, earning a reputation as an energetic leader through his commitment to various regional connectivity projects such as RASCOM. In 1996 he joined ICO Global Communications as African Regional General Manager, spearheading the companies’ activities across the African region.

A national of Mali, Dr Touré holds a Masters Degree in Electrical Engineering from the Technical Institute of Electronics and Telecommunications of Leningrad, and a PhD from the University of Electronics, Telecommunications and Informatics of Moscow. He is married with four children and two grandchildren, and is proficient in four official ITU languages: English, French, Russian and Spanish.